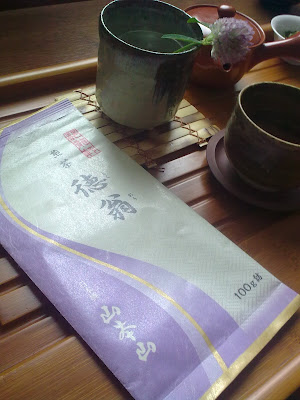 This tea, along with a lot of other nice little things, recently arrived to my mailbox as a gift from friend and a fellow tea-lover who is in right now and will stay there for the next few months.

Edit: This tea was later revealed to be the Tokuou from Yamamotoyama company, being a blend of teas from various regions, namely Uji, Kyoto (70%), Kagoshima (25%) and Shizuoka (5%). 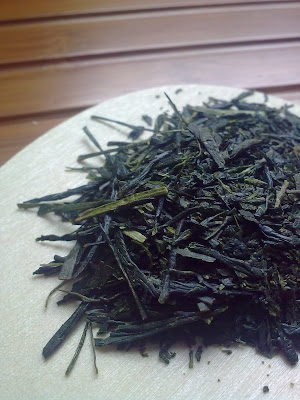 After opening the purple-white package and examining its content, leaves of this tea are mostly short needles with quite a lot of dusty-particles, indicating that this is a Fukamushicha (deep steamed tea). They are mostly dark-green and shiny, though there are also some lighter leaves as well as small amount of stems.

These leaves smell fresh, nutty and light, though noticeably more intense than less steamed versions of Sencha. After being placed in a preheated kyusu, this strong smell even intensifies and pleasantly fills the whole room. First infusion is light-green, yet opaque in color and very full and intense in taste; fruity and vivid with long-lasting spicy aftertaste.

Second infusion is already almost non-transparent and vividly green in color. The taste is significantly sharper, nuttier, yet sweeter. This tea maintains unbelievable green freshness, even reminding me of Shincha as a nice, nostalgic memory of spring, which I definitely haven’t expected to experience in this rainy, late September. 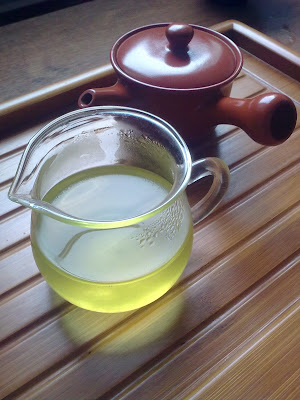 Third infusion is a bit milder, yet still very intense and sweet in taste. The sharp character of this tea is, however, replaced by softer, hazelnut-like tones, which dominate the aftertaste as well.

This tea is taken into one more infusion, which is similar to first infusion in color, yet already quite grassy and woody in taste with a hint of bitterness, which, however, still isn’t anyhow unpleasant. 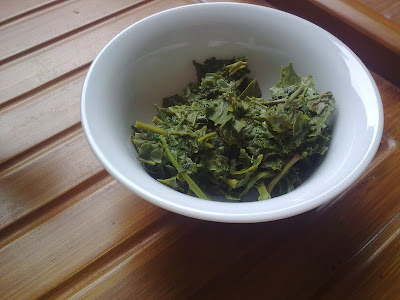 Though I usually prefer Asamushi to Fukamushi Sencha, this tea brought back some nostalgic memories of spring – such as impatient waiting for Shincha and all the other things associated with it.

Thanks again for this enjoyable gift.

Prague and its tea 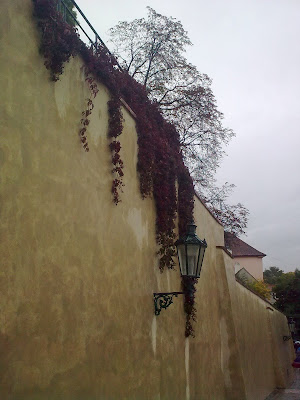 Even though this weekend was mostly a rainy one for central Europe and not at all pleasant for any kind of outdoor activities, I decided to use the opportunity to, after very long time, once again visit probably one of most famous cities in the world - Prague.
Apart from being one of the most densely visited places in Europe... 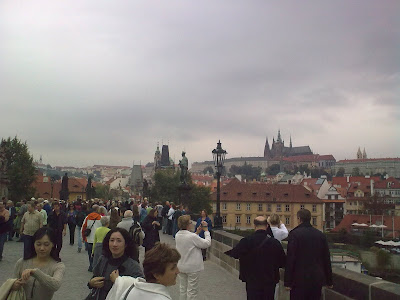 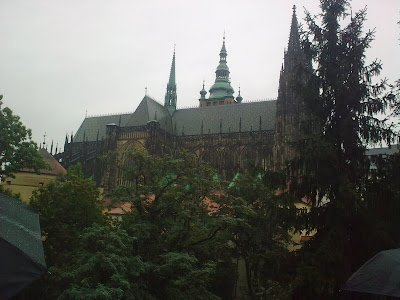 ...and, therefore a growing tourist paradise overfull of hotels, souvenir shops and restaurants of all kinds, Prague is also known for its large variety of teahouses, teashops and, together with smaller and less famous Brno, a center of Czech tea culture.
At this point, it's a pity that I don't know the city itself that much - the main difference from Brno, where I always know what teahouse I'm heading to, is that I've personally experienced only one teahouse in Prague so far.
Still, this place definitely is worth mentioning. 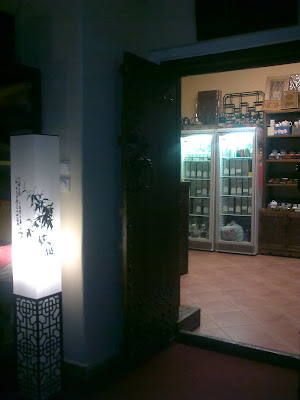 Cha Dao is located right next to the main railway station (and I was able to locate it only thanks to this) and is ran by the same people as online shop Teanet. As they are of Chinese origin, the whole teahouse is decorated in quite a traditional style, giving it unique atmosphere and the advantage of being quite different from all teahouses in my hometown Bratislava, which are generally a mixture of Chinese, Japanese, Indian and Arabic inspirations with European influence and can often seem quite disparate. 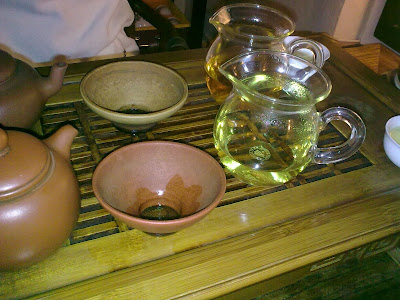 Menu of Cha Dao also comprises mostly traditional Chinese and Taiwanese teas, available in wide range of grades, from average to the top. There are, however, some Japanese teas in their offering as well, though I decided to order this 2010 Huang Jin Gui oolong from Anxi. Expect a post on this tea in the near future. 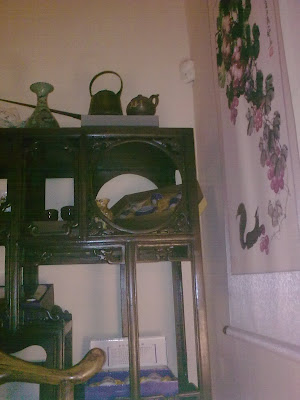 In the end, here is a question for those of you who know Prague better than I do or have visited in in the past and had some interesting tea-related experience - where to go and what to visit? I want to focus more on Prague's teahouses the next time I visit it, which, I hope, will be soon.
Posted by Michal Tallo at 8:37 PM No comments: 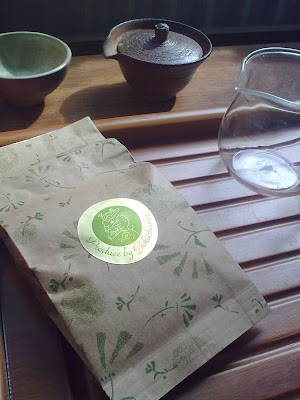 Yoshiaki Hiruma, working under his trade name Gokuchanin, is a true artist.

Being a well-reputable producer from Saitama , he is especially known for his Temomicha (hand-rolled teas) as well as other completely hand-made teas and is recently gaining attention all over the world. Among his many achievements is the first prize in the prestigious Temomi Tea Competition last year.

Hiruma is unique in a way that he obviously loves to experiment, not sticking only to Temomi and other traditional Japanese teas, but also, among other things, producing highest-quality oolongs, which he calls Hanhakoucha (he even created something like Japanese version of Bao Zhong, just a very lightly oxidized tea, called Bihakkou Sencha).

This is the first of two unconventional Japanese teas I had bought in and then mentioned them in this post. Teamountain offers three kinds of Hanhakoucha, all of them made from different, rare cultivars – this one is made from Toyoka, while the other two from Seirei and Sayamakaori. 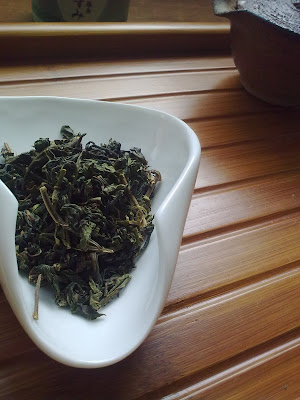 Originally packed in a simple, yet elegant sac, these dry leaves remind me of autumn; they range from dark-green to yellow and brown, containing some stems as well. They vividly smell of flowers, honey, spice and pears. 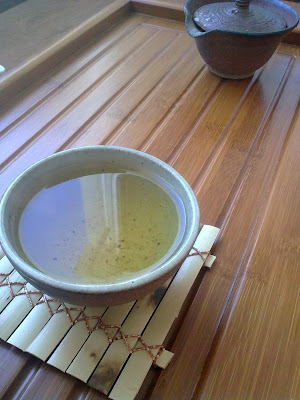 First infusion is yellow in color and similar to dry leaf in smell. Brewed in water just below the boiling point for quite a long time and with high dosage, it tastes softly, yet vividly and not bitter at all. It’s light and complex at the same time, spicy and sweet and overall perfectly harmonic and balanced.

Next infusion is very reminiscent of honey in smell and sweet butter dominates the taste, being less fruity and light and more noble and creamy with wonderful mouth-filling aftertaste. 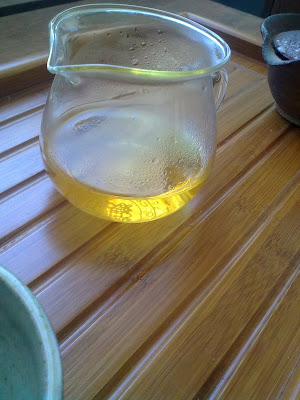 Third infusion is a bit lighter in character, though it doesn’t mean this tea is already drained out – it just shows its great extent, as this once again is being more similar to first infusion with its fruity, light sweetness and flowery smell.

Following infusion is also very fruity and less creamy in taste, though there is a new, interesting hazelnut-like tone present in taste and smell. This similarly delightful character persists in three more infusions, giving seven satisfying infusions in the end – reminder that this tea isn’t steamed like most Japanese green teas. 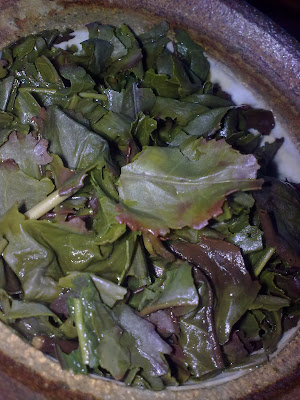 This tea is somehow similar to lighter oxided, high-quality oolongs from , though it isn’t denying its origin and maintains something distinctly Japanese. Though these typical Japanese tones may be mild, they simply are present and that – among other things – is what makes this beautiful tea so unique and outstanding. 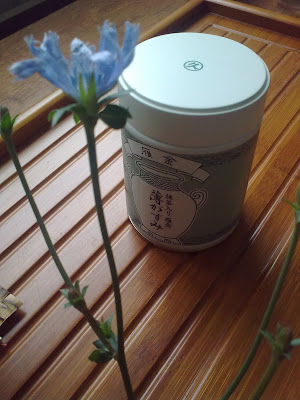 This is the second of two Matcha flavored teas by Marukyu Koyamaen which I recently purchased via Teatrade.sk. Though both of these are Matcha flavored and therefore share some similarities, this tea is completely different from the previous one. 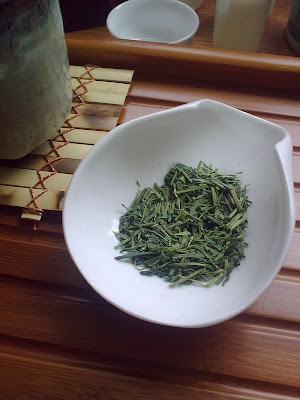 Compared to Matcha flavored Sencha Asagiri, this tea is significantly deeper and sweeter in smell. As far as I know, all Marukyu Koyamaen Karigane teas are made of Kabuse or Gyokuro and are therefore naturally sweeter and heavier in taste than any Sencha – combined with additional Matcha, it’s even nuttier and sweeter than I imagined. 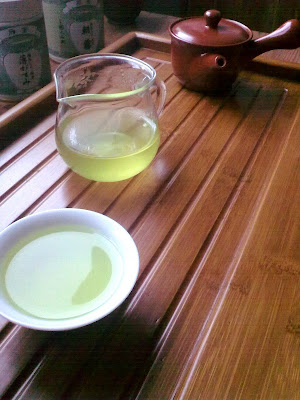 Same characteristics go with taste of first infusion, as this is a sated, heavy tea - though I would say it’s significantly different kind of heaviness than the one you can find in Gyokuro or Kabuse, being more similar to heavy character found in good Matcha. Surprisingly, these tones are accompanied by quite vivid roasted-like taste, mostly resembling edible chestnuts.

This roasted tone even intensifies in second infusion, which is, in contrast to vividly green color of the first one, more yellow, though still quite opaque. It still is very nutty, heavy and markedly sweet. 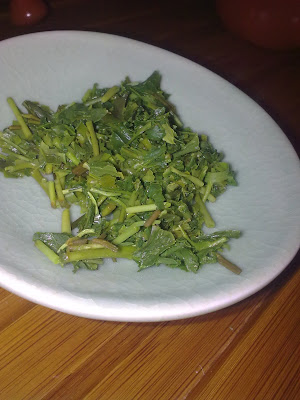 This is a humble, inexpensive Japanese green tea, quite simple in character and yet very pleasant and interesting. It’s heavier and much more sated than its Sencha counterpart, lacking all of its fresh, light tones and overall being much sweeter and deeper. For those preferring sweeter Japanese teas over freshness of Sencha, this can be good daily tea.

Other than that, I once again visited the city of and also the Probuzeny Slon teahouse, about which I talked some time ago. This time, I drank another wonderful tea there and also purchased two special teas from Teamountain – more in two on-coming posts, first of which is hopefully going to appear here during this week.

Posted by Michal Tallo at 7:33 PM No comments: 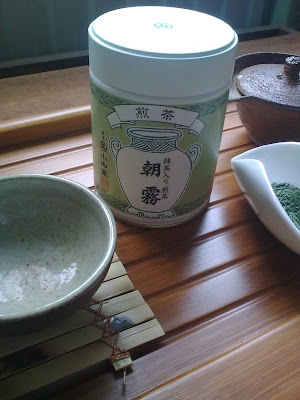 Once again, I purchased two teas by Marukyu Koyamaen. This time, they aren’t that ordinary – both of them are Matcha blended, which means that small amount of Matcha has been sprinkled over the leaves to create a completely different character of tea.

Marukyu Koyamaen offers three kinds of Matcha-blended teas – as I am not a big fan of Genmaicha, I bought only two of them, Sencha and Karigane. These yet aren’t 2010 teas, but 2009 Aracha processed in first spring days of 2010, before the actual harvest in .

This post is going to pertain to the first one.

Sencha Asagiri comes in simple, yet aesthetic can, so typical for most Koyamaen teas. 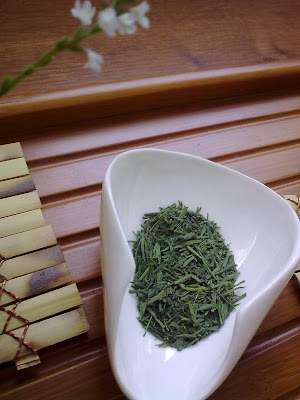 After opening the can and the inserted bag, strong, sweet and very Matcha-like smell comes out, markedly reminding me of powdered tea’s presence. It has both fresh, light notes of Sencha and sweet, deep and nutty aroma of good Matcha.

This Sencha has quite nice needle-like leaves, though these are, as a result of additional powdered tea, naturally lighter and less shiny in color than most Japanese green teas. 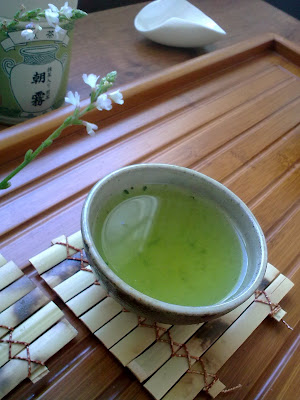 First infusion is beautifully dark green in color and opaque, once again clearly affected by Matcha. Its taste is strong and thick, with no unpleasant bitterness, being enriched by powdered tea’s natural sweetness.

Second infusion is expectably even more vivid in taste, though a bit lighter in color, as most of Matcha has already been rinsed into the first infusion. It’s very replete with grassy, literally “green” tones.

Next infusion is weaker in taste and overall character, being dominated by grassy tones and much less sweetness than previous two. This tea is taken into one more infusion, though it already gave out most of what it had. 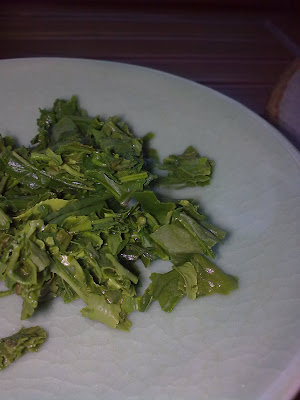 An interesting, inexpensive tea very suitable for daily drinking. As both Sencha and Matcha are quite high in theine, it’s obvious that this can also be a good pick-up drink.