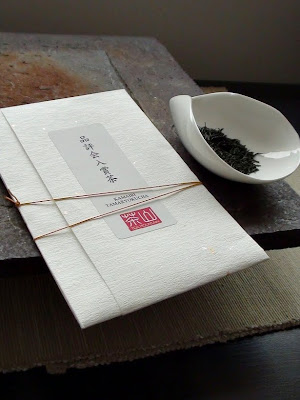 Following the previously mentioned competition grade Gyokuro, here is one more tea that competed at the All National Tea Competition of Japan, this time even getting the third prize with 185 points out of 200. Picked in Kamimashigun, Kumamoto, it was imported to Europe by Teamountain and sold in Slovakia by Nomad.sk, from which I got my bag quite a while ago, though I hadn't had enough time to talk about it back then.

As the name suggests, it is a traditional, pan-roasted (kamairi) tea from Ichibancha, the first picking and most likely the Yabukita cultivar. 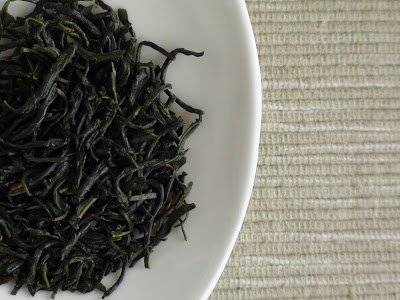 Packed in a design typical for most higher-grade Teamountain offerings, these are some beautiful, uniform and curly leaves with dark-green shine.

Their smell is typically sweet and creamy, though there is one thing distinguishing it from most Kamairi teas – it's less nutty and caramel-like than the majority of these teas, instead taking on a more vegetal, “lighter” side of aroma. 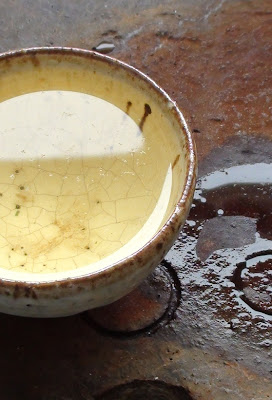 The first infusion is faithful to this smell – light-yellow in color and transparent (though getting a bit opaque as it cools down), its taste is somewhat drier and lighter than what I'm used to. Even so, most typical Kamairicha tones are vivid – almonds, hazelnuts, creamy sweetness and noble softness with significant amount of umami. The taste is pleasantly refreshing, not too juicy and fruity, but very pure and complex – same goes for aftertaste, which is light, but intense enough to remain in mouth for a long time.

The second infusion is poured down immediately, with the resulting brew being yellow, more aromatic and with fruitier taste – reminded me of honeydew melon and blackberries. This brew is a bit heavier than the previous, though still quite sweet and nutty. Its aftertaste is also less light and significantly more mouthfilling, dominated by fruity notes and slight sharpness.

The following infusion is the greenest of all in terms of color; its taste is now much nuttier, being very reminiscent of hazelnuts and almonds. The previously strong fruity tones are now weakened; this brew fully shows the drier side of this tea's character. Still it doesn't show any unpleasant tones and remains very complex and pure – same goes for the aftertaste, which is shorter and warmer than before. 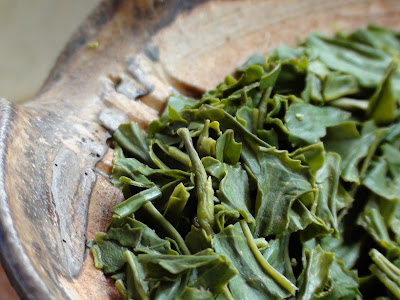 One more brew is made of these leaves; yellow and transparent, quite woody, simple and refreshing with just medium-long aftertaste. 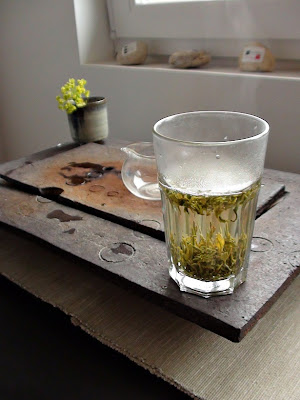 2012 Yunnan Gao Shan Cui Ming.
Only now I realize how much I missed watching the young leaves; how I missed their dancing in the glass.
Happy Easter and beautiful spring to everyone!
Posted by Michal Tallo at 2:35 PM 4 comments: 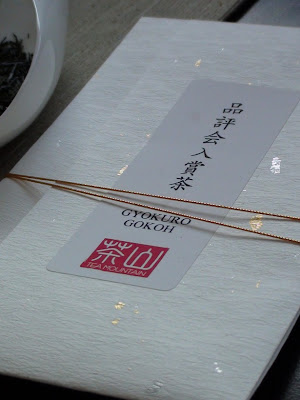 As I'm gradually finishing drinking last season's teas (and fresh Chinese greens are quickly arriving), there are still at least two extraordinary greens I would like to talk about. Both of them competed in 2011 All National Tea Competition of Japan – the first of them is this Gyokuro.

Made of Gokoh cultivar, it comes from the famous Gyokuro-producing region of Yame in Fukuoka prefecture of southern Japan. Teamountain imported this tea to Europe - and I have purchased it from Slovak shop Nomad.sk few months ago. 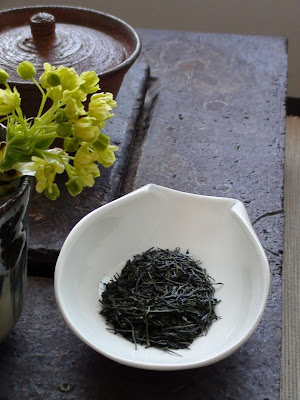 I had a chance to drink Competition grade of Gyokuro Gokoh from Teamountain in 2010 as well – see here for a detailed post. However, it is clear on first sight that these two are very different teas – compared to the 2010 version, the 2011 has shorter, smaller leaves, probably a result of deeper steaming. This doesn't take any of the attractiveness these leaves possess - dark-green, shiny and uniform little needles, with beautiful, deep and creamy sweet smell. 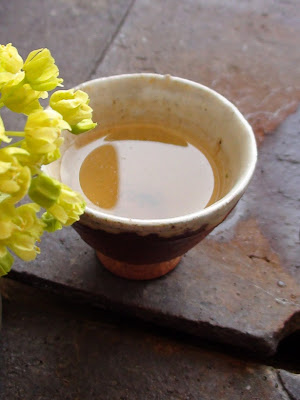 Prepared in a traditional manner, big amount of leaves is brewed in very small amount of lukewarm water for a long time. The resulting infusion is yellow in color, opaque and very thick in both smell and taste – there are countless tones in these, from the predominant rich umami to milky sweetness, cream, wild berries and slight undertone of hazelnuts. Despite its typically warm and heavy character, it seems fresher than most traditional Gyokuro teas, especially thanks to the very mild, but still detectable herbal (especially mint) and green nuance – makes drinking this tea on a sunny spring day even more enjoyable. Its aftertaste is long, heavy and mouthfilling, with all of the deepest tones found this tea's taste now even more vivid. It also has a significant effect on mind and body, awakening the senses with its high amount of caffeine concentrated in thick, oily brew – similarly to most good Gyokuro teas, this is a great drink when one really needs to concentrate and stay relaxed at the same time. 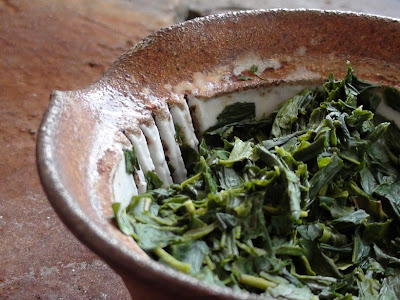 One more infusion is made of these leaves with slightly warmer water; the resulting liquid is green and more transparent. Its taste is just a little bit lighter, greener and more refreshing, while it still keeps the rich, creamy sweetness, umami and depth. This infusion once again shows that this Gyokuro Gokoh is slightly more on the vegetal, green side instead of the ripe-fruit character so often found in such traditional high-grade teas – I must say I enjoy this not-so expected character, for a change. Even so, the tea still managed to keep its very traditional, warm character.

The aftertaste of this infusion is long; it might be shorter than before, but still long enough to stay on tongue - even hours after the session. 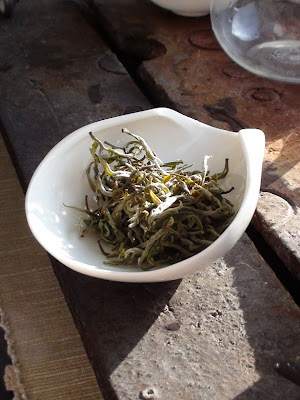 Posted by Michal Tallo at 6:29 PM No comments: