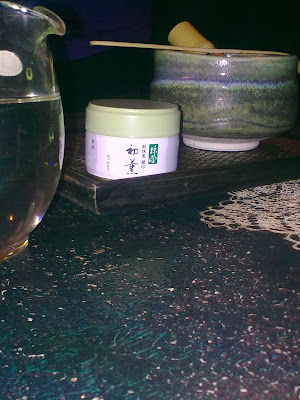 Another tea tasting organized by local vendor Teatrade.sk took place this Saturday in the same teahouse as all previous tastings- after green teas from Meng Ding, oolongs from WuYi,Japanese green teas (except for Matcha) by Marukyu Koyamaen and teas from Himalayas and Korea, this was the fifth event from now periodical series of interesting tea tastings.
This time, the theme was Matcha by my favorite Matcha producer, Marukyu Koyamaen.
This tasting was a bit different than all previous in a way that it was accompanied by PowerPoint presentation about Matcha along with video from Marukyu Koyamaen, basically describing how their tea is produced and so on. It added quite nice educative element to the evening, and I really welcomed that. 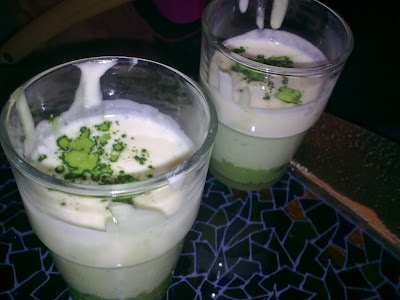 There was also this pleasantly sweet little surprise in the beginning - tiramisu desert flavored with cooking-grade Matcha. As most of you probably know, it's not very wise to drink Matcha with empty stomach, so this, apart from pleasing our taste buds, also helped as something small to eat. 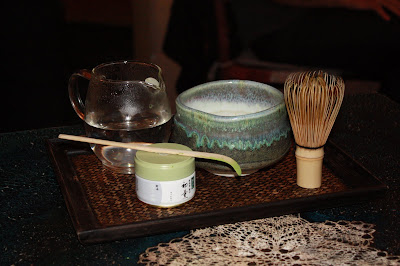 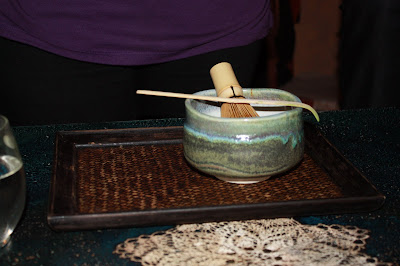 After these wonderful Matchas, we tried some fresh teas from Shizuoka which just arrived to Teatrade - two grades of Sencha, one Kukicha, Kawayanagi (Bancha) and Houjicha. These teas are generally more affordable than those of Marukyu Koyamaen and are, in my opinion, very suitable for everyday drinking and even brewing in larger quantities.
At the end of the event, we watched some photos and videos from Teatrade's owners recent trip to China.
Overall, this was another interesting evening with good tea and nice people.
Another tasting- of Phoenix oolongs - is going to take place in the same teahouse on 7 August, though I unfortunately won't attend it, as I am leaving for Czech republic tomorrow and will spend some time in its second largest city, Brno.
Everyone is welcome, though, I can just recommend.
Posted by Michal Tallo at 12:51 PM No comments: 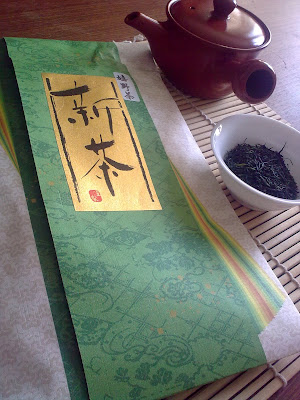 Weather outside is literally unendurable. Temperature is reaching 35 degrees everyday for whole week, air is extremely sultry even in late night hours and almost unbreathable. Luckily, this is supposed to end tomorrow and the temperature is, according to the weather forecast, going to fall on 21 degrees. I can't wish for more, to tell the true. Even all the flowers outside are burnt by the sun and dying from an absolute lack of rain.

This tea was kindly sent by Mike of Karatsu pots, along with two of his beautiful teacups. One of these got unfortunately damaged on its way around the world, so I glued it up the best I was able to and will probably use it as a small vase on my tea tray, or just as a very nice decoration.

Tea was made by Tokunaga Seicha, producer from Ureshino, . Ureshino is well known over the world for its Tamaryokucha, though the offering of these teas is quite limited around here – even though there are few Ureshino teas available every year, most Tamaryokucha on Czech and Slovak market comes, for some reason, from Uji and and therefore are different in character. 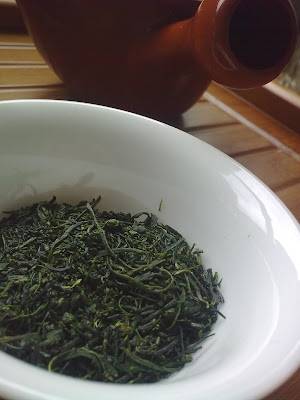 This tea is prepared in a small kyusu and drank from cup made by Mike, as it goes perfectly with character of this tea. 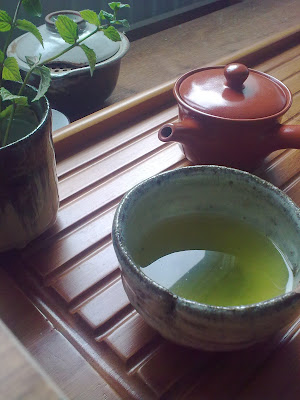 Fist infusion is yellow in color, being brewed according to Mike’s instructions with water far below the boiling point and longer infusion time. I generally prefer to prepare Japanese teas like this, as this method gets out that milky, creamy taste I adore so much.

Taste of this infusion is very deep, intensive and with noble tones of almond and something like forest fruit.

Second infusion is poured off immediately, as its color is already deep green and opaque. This brew is surprisingly very different from previous one, with distinct umami taste, more typical for Gyokuro - making this tea even more interesting.

Third infusion is also dark green in color and fruity in taste, though the creamy tones are less vivid and the aftertaste and general feeling of this brew is somehow lighter, though more refreshing. 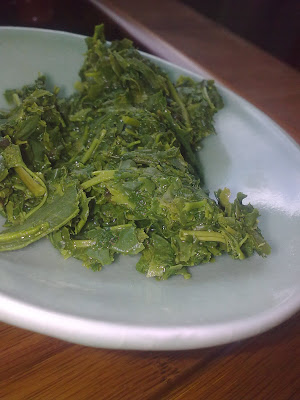 Fourth infusion is prepared with freshly boiled water and left in a teapot for quite a long time. It also is the last infusion, as the tea already got out all of its charm.

Overall, this was a very pleasant tea, quite unique even for a Japanese green tea - in a positive way. I will probably seek more teas from Ureshino and Kyushu in general from now on, as they are great alternative to teas from Uji and Shizuoka, being really markedly different in character.

Thanks once again for your kindness and an opportunity to try this tea, Mike. 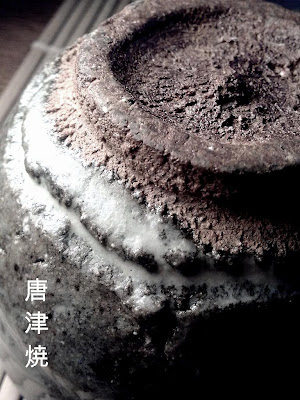 In the end, this is a detail of bottom side of a teacup I drank from. In a moment of boredom I had yesterday, I added characters for "Karatsu-yaki" - correct me if these are wrong.
I enjoy the earthy, natural look of this cup and am looking forward to see how will the inner glaze of it change as the time goes by - that, to me, is a true charm of this style of teaware.
Posted by Michal Tallo at 3:14 PM 4 comments: 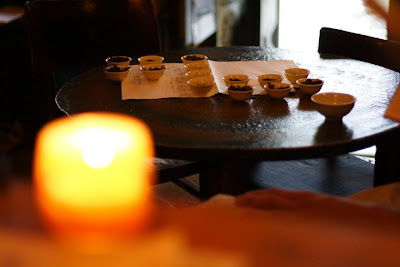 Once again, I attended tea tasting organized by Teatrade.sk in the same teahouse as before. This time, the tasting took place inside the teahouse, instead of its garden, as the weather outside was extremely hot and sunny, so we preferred the cool air which, thanks to this teahouse being located in old, historical house with thick walls was still present inside, even without air conditioner.
This time, the theme was Darjeeling and Nepal teas from 2010 First, Second and 2009 Autumnal Flush.
We drank these teas: 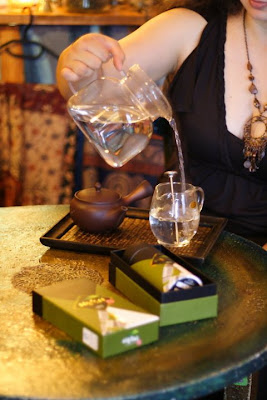 Then came the pleasant surprise - 2010 Saejak Hadong Nokcha.
And it really is as pleasant as i imagined it to be. 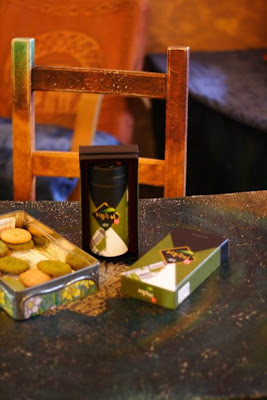 Korean green tea and home-made Matcha cookies, what a combination!
Next tasting - of Marukyu Koyamaen Matchas - is going to take place on 24 June in the same teahouse.
---
All photos were taken by main organizer, not me, as I haven't took any photos this time. 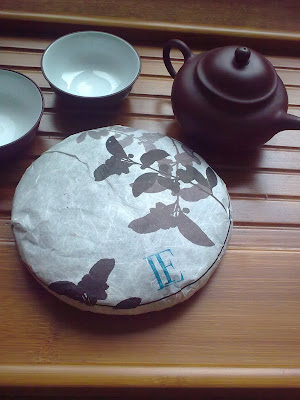 I’m back… The weather was kind enough to stay sunny and calm during my whole short “summer break” and changed just today, with heavy downpours and quick storms alternating with sunshine.

Ideal weather for Puerh, I would say. I have to mention that I don’t drink Shengs and Puerh in general that often – but still, I wanted to share my notes on this wonderful and really special tea.

Some of you may know this tea… 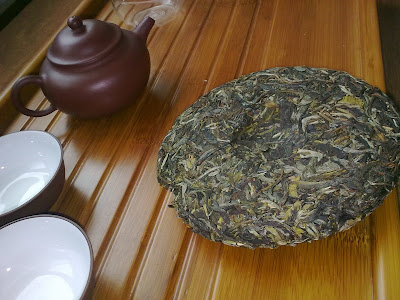 This tea comes from the same collection and producer as the one Bret of Tea Goober wrote about some time ago, though the one he had was the 2009 picking and processing, while Mao Cha for this one was already picked in spring 2010.

There are two different labels so far this year, Green and Blue. Green comes from wild trees which are 100+ years old, while this Blue version is made of semi-wild trees, 80 to 100 years old. Place of origin of this tea is Mang Fei Shan, Yong De, Lin Cang. 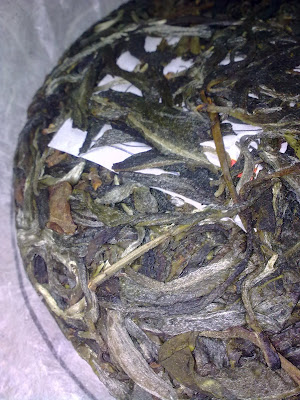 Both teas are hand-processed and hand-compressed in stone form, which makes this particular cake quite easy to divide without any need to use rough force.

As soon as I unwrapped the cake, first thing that caught my attention was obviously very high quality of used Mao Cha. Then comes the smell – smell of good fresh Sheng, vivid, fruity, rich and still fresh. 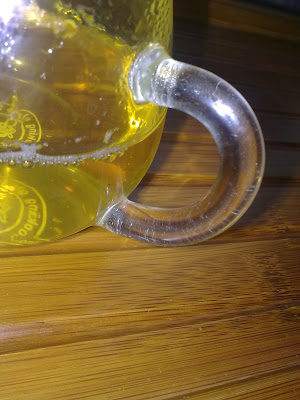 Color of infusion is yellowish-green and seems a bit lighter than in most fresh Shengs.

Taste of this tea is smooth, rich and markedly fruity, with no smoky tobacco-like or other unpleasant tones at all. This taste lasts and interestingly diversifies in countless infusions. 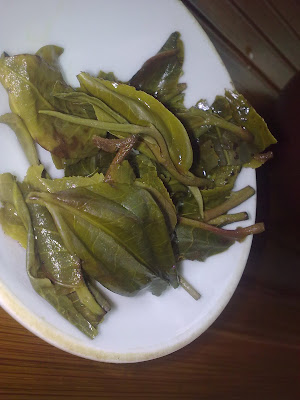 leaves in their full blossom.

As I already said, this is a very special tea and sure has a great potential for aging – sometimes it’s somehow unfortunate that I prefer fresh Shengs and, therefore, will likely consume this tea soon.

P.S.: a bit of advertisement - another degustation, this time of Darjeelings and teas from Nepal, organized by Teatrade.sk will take place this Saturday, 10 July 2010 in same teahouse as all previous degustations. Everyone is welcome!
P.S.2: to avoid a misunderstanding, this tea was prepared in a small porcelain gaiwan, lid of which you can see on the last photo, not the fake-yixing teapot - that's just a decoration.
Posted by Michal Tallo at 5:53 PM 3 comments:

Summer, cubes of ice and... 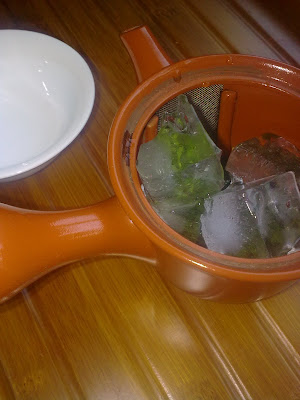 Shinobi-cha, traditional Japanese way of ice-brewing, is a real test of patience. It can take hours for all the ice to melt - but it definitely is worth it, as the best qualities of tea are even improved and sharpened. 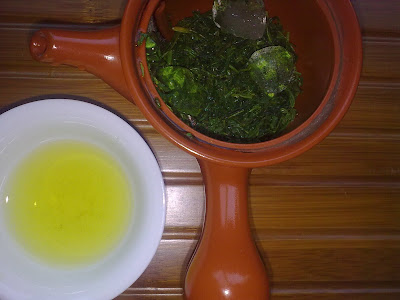 Most suitable for this kind of brewing are high-quality Japanese green teas - it's originally supposed to be used for Gyokuro, but Sencha and Kabuse are great as well.
Still, you can experiment - it's interesting to try also Chinese steamed green teas, for example. 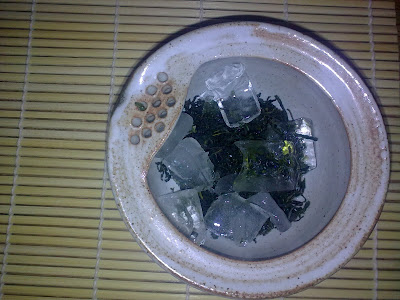 Meng Ding Cui Yu 2010.
All you need is good tea, ice and... patience, a lot of patience.
I'm going to shut myself out of civilization for next five days - with no internet, television or even a proper radio signal.
Sometimes it's nice, just to read and relax all day like this.
Until then, enjoy the summer!
Posted by Michal Tallo at 7:28 PM 4 comments: