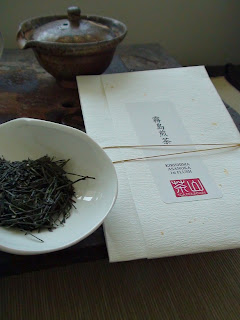 When thinking about last year and its teas, memory of one particular Sencha stands above the rest. Asanaoka Kirishima, with a character unique and excellent enough to be well-remembered even a year later – see notes on the 2011 version here.
This year, we're lucky again, as Teamountain offered a fresh version of the same tea. And just like last year, I immediately purchased it from Slovak shop Nomad.sk. A handpicked, Asamushi (light-steamed) tea made of Asanoka breed from Makizono near the Kirishima mountain, Kagoshima prefecture. A product of Mr. Nishi, a regular tea-competitions attendant. 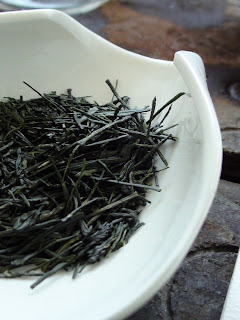 Similar to last year, these beautiful leaves are a bit shorter and smaller than those of most Asamushi teas, placing them more on a border between Asamushi and Chumushi (middle-steamed). They are shiny and dark-green, darker than many Senchas – almost reminding me of Gyokuro. Their smell is also putting them aside from the typical Sencha character, being much sweeter, creamier, deeper and softer. 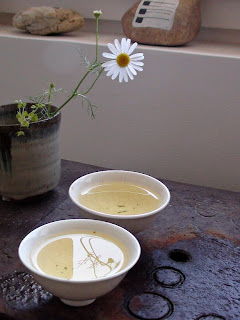 Memories of last year's version are taken into account and water is cooled down more than it would usually be to enhance the sweetness even more. The resulting first infusion is light-yellow in color, completely clear in transparency and with a very pure, refined taste, comprising tones of milk, sweet green grapes, young peas and a creamy sweetness with significant amount of umami. This taste lingers on tongue for a long time, also having a noteworthy effect on mind, making it very relaxed – and just as pure as the tea itself.
Compared to the memories and notes of last year's version, the 2012 Asanaoka Kirishima feels lighter compared to its heavier, almost Gyokuro-like predecessor. This adds a new hint of refreshment and enriches the tea's character in an interesting way, also pointing to its small-scale production – never the same tea, each season is slightly different (though consistent in terms of quality). 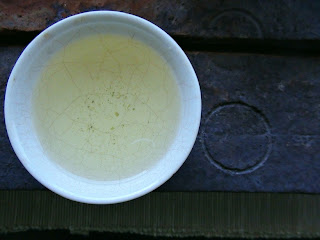 The second infusion loses a bit of the former creaminess and develops a new, more fruity tone – green apples, green grapes, pears, an overload of green sweetness. These nuances are, of course, followed by strong umami and overall refined purity, keeping the complexity of previous brew. As expected, the aftertaste is slightly shorter and simpler now, being cooler, moderately sweet, fruit and without any trace of bitterness.
The third infusion is once again light-yellow in color and can be described as a nice mixture of nuances typical for the first and the second infusion. While keeping the green fruitiness, the creamy, milky tones return in a more vivid way as well along with slight traces of hazelnuts. In terms of length, the aftertaste is similar to the second infusion, though it feels more pronounced on tongue, mostly comprising the creamy milkiness, accompanied by a bit drier nuttiness.
One more infusion is made; a sharper, simpler and refreshing drink, still quite sweet and fruity, with predominant dry nutty nuances. 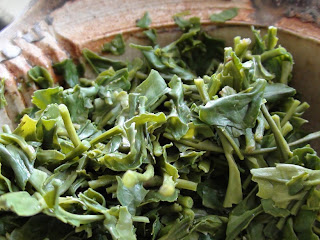 As noted before, the 2012 Sencha Asanaoka Kirishima is different from last year's tea. Apart from being lighter, another interesting difference is the color of brew – while last year showed a vividly green drink, this year, the tea is more on the yellow side.
The 2012 is different – and, maybe thanks to this difference as well, at least equally enjoyable.