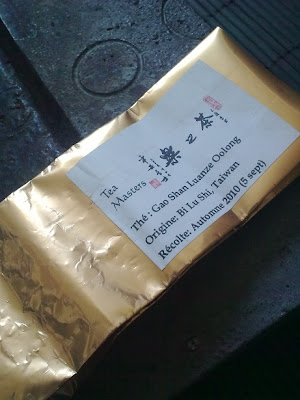 Some of you may have noticed the little competition going on at the end of last year on Mattcha's – Petr Novák offered this lovely teacup as a prize: 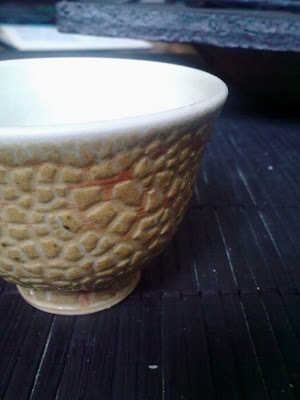 When the package arrived to my place, there was another nice surprise that Petr sent along with the teacup – this Gaoshan Luanze oolong from Teamasters, picked on 5 September in Bi Lu Shi (Check also Petr's post on it. Edit: And Matt's). 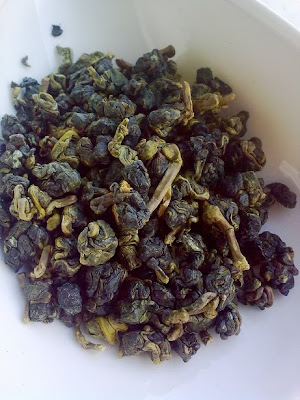 The obvious high quality of this tea can be seen right as the leaves are being examined; this autumnal oolong has incredibly creamy, yet gentle sweet smell with nuances of flowers, which, however, lack the aggressiveness of so many light-oxidized oolongs (because of which I usually don't drink them very often) and is, in this case, much more natural and pleasant. 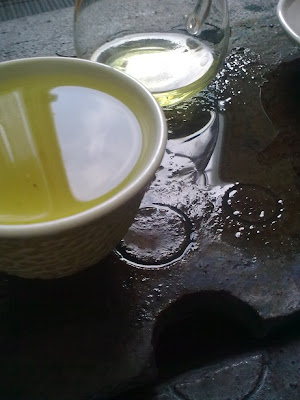 Being brewed, this tea gives out light and clean yellow infusions, which are just as clean, light and full on tongue with predominant notes of sweet cream, fruit and harmonic, complex smoothness.

The amount of satisfying infusions this tea can produce seems almost infinite (especially for a person who is used to drink mostly Japanese green teas with their four-brews maximum). Moreover, it seems like it doesn't get too bitter even when brewed for a long time – I forgot to pour off the third infusion and still, the resulting liquor was very enjoyable, sweet and only enriched by noble, not at all unpleasant bitterness. 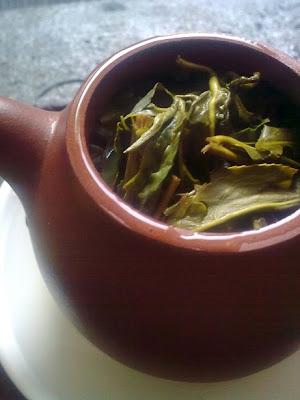 I spent a long time with this tea, infusing it again and again, with every brew a bit different than the previous one, contributing to the very nice Saturday afternoon.

Thanks again for your kindness, Petr. 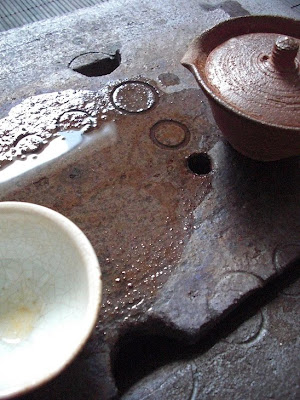 The sun magically returned the day after my last post and has been shining ever since, reviving my demand of Japanese green tea. To celebrate the fact, I decided to drink something really special today – out of all competition grade greens in 2010 Teamountain offering, this one seemed to be the most promising.

Picked in Yame, Fukuoka, one of the most famous Gyokuro-producing regions of Japan in May, this tea was made of Gokoh cultivar, which is considered the most suitable for Gyokuro. Just like the previously mentioned Gyokuro Saemidori, it competed in last year's National Tea Competition of Japan. This is the last sample kindly sent by Martin Spimr of Teamountain with my order; a sample which I'd been sparing for quite a long time, waiting for the right moment to open it. 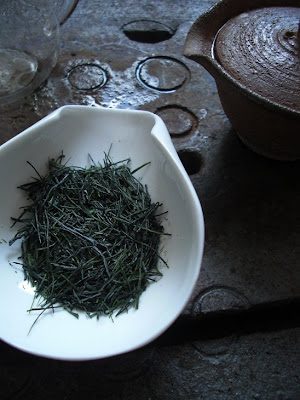 These leaves are unusually beautiful even for a good Gyokuro – very uniform and even, quite long needles, plastic on touch and with typically blueish-green shine. Their smell is rich, sweet, deep and milky, sophisticated and wide, with notes ranging from sweet cream and milk to ripe fruit and pines. 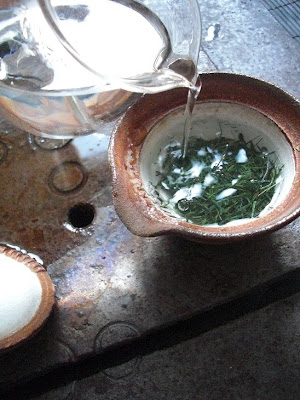 Traditional way of preparation is a must for such tea – water is therefore cooled down to 50°C and carefully poured on the whole sample. 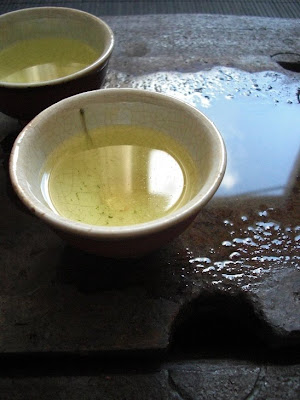 After four minutes of brewing, the first infusion is ready; it has unusually transparent, clear yellow color and slightly oily consistency, accompanied by humble, sweet smell of fruit and vanilla. The first sip is almost a shock for tongue - this taste is unbelievable, extremely rich and heavy with dominant tones of milk, sweetness and umami, the richest and vividest umami I've experienced in tea for a long time. This Gyokuro is quite warm in character, yet still possess a fresh, almost “mountainous” nuance of conifers and pines, accompanied by pure, relaxing feeling of a walk in the woods. As if it still weren't enough, the liquor further contains hints of various sweet, ripe fruit, most notably plums and pears.

The second infusion is prepared with a bit warmer water and shorter brewing time, resulting in a light-greenish yellow brew, which is now predominantly fruity in taste, a bit lighter and still very clear and refined. Out of many kinds of fruit this tea resembles, plums are still the most outstanding, followed by pears, apples and even pineapple. This infusion is atypically smooth for a second brew of Gyokuro, which usually brings a bit of spiciness and sharpness to the tea – not in this case, however, this tea seems to keep its noble sweetness much longer than anything else.

This brew is followed by long, mouthfilling aftertaste with vivid sweetness, umami and creamy milkiness. 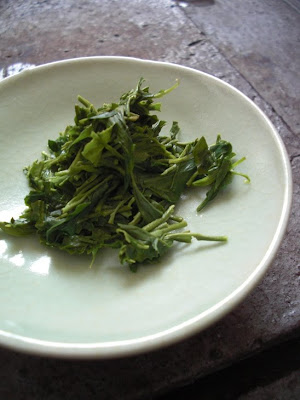 Thank you, Martin, for sending this sample and for an opportunity to try such an amazing tea. 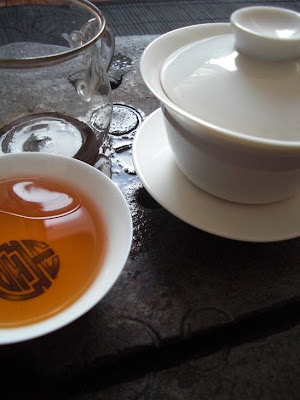 I've been terribly busy since the New Year's Eve and will probably stay busy at least until the end of January. As if it weren't enough, the weather here in Bratislava decided to contribute to my bad mood and tense even more, staying rainy, cloudy and cold all the time – it even went so far as to breaking the rainfall record with the biggest amount of downpours in history of many years. That basically means the sky is dark all the time, whether it's day or night and, in it's worst stage, we were continuously unable to see the sun at all for more than a week.

As weather generally tends to affect my mood a lot and I am a big fan of spring, you can imagine the impact it has on me. 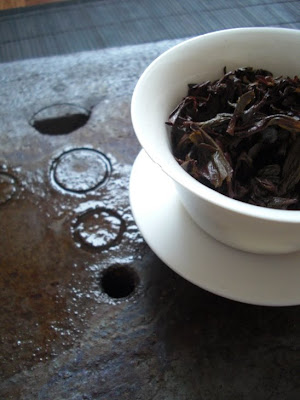 What saves my sanity at such times is, without a big surprise, tea. Lately, I've been enjoying almost exclusively darker oolongs, namely various kinds of Yancha, Taiwanese Bai Hao and even one interesting Japanese oolong from Saitama (about which I'm going to write, hopefully in the near future). My consumption of Japanese greens decreased rapidly, as I need at least a bit of natural light to truly enjoy them.

Right now, I'm drinking a simple, solid basic grade of 2010 Shui Xian, that kind of tea which by all means doesn't surprise, yet definitely doesn't disappoint at the same time. Right now, it seems better than anything, warming up my body as well as mind.

Today's weather is weird. Even so, it brightens my mood more than anything – in one minute, the sky is dark and strong wind is blowing, in another, the sun begins shining and it seems like if there have never been any clouds... And it goes on, changing all the time like this, as if these two opposites were fighting in war of conquering the day. 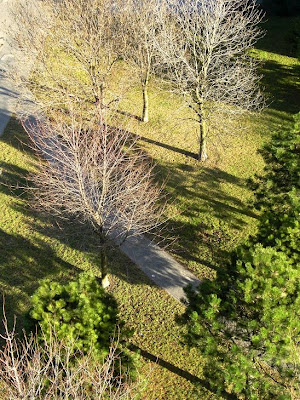 These sunny moments are precious to me; they may be short, but even the simple fact that they showed up is really joyful.

It has just started to rain again as I'm writing this.

And yes, as most of you probably figured out, the point of this post is that I am neither dead nor did I gave up blogging. May your days be sunnier than mine, friends!