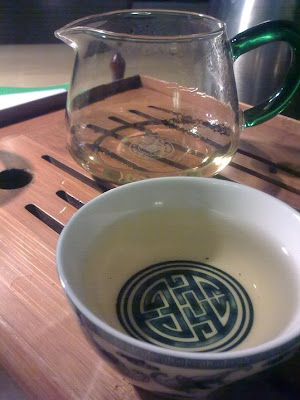 Visiting Brno, Czech republic, I'm once again sitting in one of my favorite tea-rooms here, mentioned several times on this blog – the Probuzeny Slon teahouse. At the moment, I am enjoying last infusions of a wonderful and unusual tea, one of those I wanted to try since the moment I first heard about it.

This tea is Hwagae Uricha (Tongecha), a Korean yellow tea produced by master Cho Yun Suk and imported by Teamountain. Quite an unusual Balhyocha for me, as it isn't loose – instead, this tea is pressed into the shape of a 100 gram ball and its appearance may be reminiscent of Pu-erh.

It's taste and smell is amazing – if someone would give me these dry leaves just to smell without seeing it, I would be tempted to say it's dark chocolate. Its taste is similar – wonderfully chocolate-like and sweet and it doesn't seem to get any bitterness even after long steeping times. As I gradually prepared numerous infusions, its smell and taste evolved, revealing more spicy tones, fruit, nuts, flowers and several other fragrances, making each infusion different. 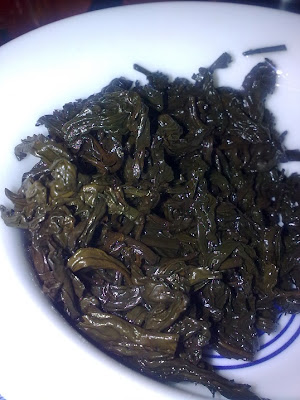 Another thing worth mentioning – after a day of wandering through the winter city, this tea was exactly what I needed. As soon as I came to the teahouse and took the first sip, my body felt regenerated – and, immediately, warmed.

Unfortunately, I wasn't able to take a photo of its dry leaves, which were still in a pressed form. After the session, though, the leaves are beautiful – quite small, whole and ranging from dark-green to dark-brown in color.

Posted by Michal Tallo at 4:35 PM No comments: 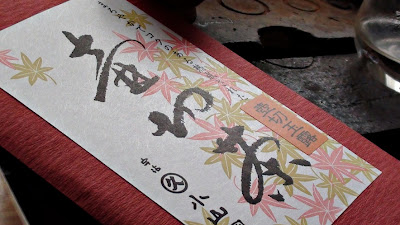 First of all, I would like to apologize – this blog was on an unexplained hiatus since the end of September. Among things that kept me busy is the fact that I have moved to a beautiful little village near Bratislava – this way, I can still keep close to the city, while the pluses are obvious – a garden, nature, calmness... drinking tea here during the warmer months is definitely going to be a wonderful experience. Then came Christmas and all things related to it – pleasant, but time-consuming.

I bought this Gyokuro back in November and enjoyed it a few times since then. As the package already indicates, it isn't a part of Uji's famous Marukyu Koyamaen's standard offering – Tsubokiri is a seasonal collection of teas released after Kuchikiri no Gi ceremony in October and sold only during October and November. Luckily, I was able to get one package of such Gyuokuro from Bratislava's Teatrade.sk store.

I've already talked about traditional storage and ripening of high-grade Japanese teas as well as the Kuchikiri no Gi ceremony last year with Horaido teas. Personally, I'm looking forward to such teas a lot every year – spring offering of Shincha is definitely amazing amazing, but autumn is my favorite season of Japanese tea; season when some of the best teas are released to the market. 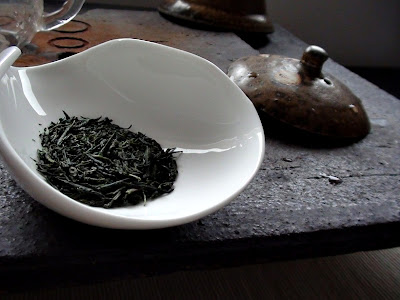 These dark-green leaves are slightly more fragmented, short and reminiscent of short needles (or pins), indicating a medium-deep steaming (chumushi). Quite typically for many Uji-style Gyokuro teas, their appearance is a bit less shiny than that of high-grade Sencha. 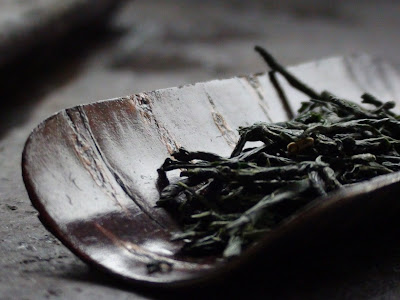 Smell of these leaves is a joy; sweet, noble, deep and, at the same time, still notably fresh. As they are placed into the preheated Shiboridashi, more and more tones keep showing up – tones I would expect from a really good traditional Uji Gyokuro and, especially, one from Marukyu Koyamaen, as their Gyokuro teas seem to be characteristic enough to be distinguished from other producers (hard to explain, though). 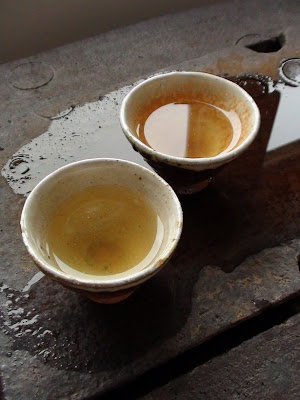 As with all higher-grade Gyokuro, I've chosen the traditional way of preparation – big amount of leaves, small volume of lukewarm water and long steeping times.

This gives me three interesting infusions, first of which is greenish-yellow in color, just slightly opaque and very aromatic. Its taste is heavy, rich and full of nuances; milky, sweet tones and umami, pine-like forest freshness and ripe fruit. The aftertaste is long and mouthfilling, very deep and sweet without traces of bitterness. This taste really is noble and special – this is one of those teas that you can feel in your mouth hours after you've finished drinking it – maybe even all day long. Similarly most traditional Gyokuros stored until autumn, Tsubokiri has a significant body-warming effect as well as a vivid awakening one, waking up the senses and enhancing mind's ability to focus. And with such a tea, it is definitely important to completely focus on the session itself.

The second infusion, prepared with slightly hotter water and shorter brewing time, is greener in color and more transparent. Now, the taste is a little lighter than before, though still very deep and sweet; the milky tone, umami and sweetness are accompanied by more pronounced, sharper note of fruit (especially grapes and pears) and a very slight spiciness. The aftertaste, though, is still predominantly sweet and milky – and, seemingly, even vivider and longer than that of the first infusion. 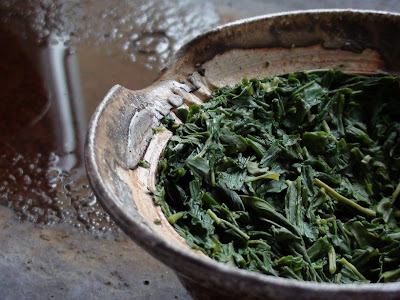 One more brew is prepared – while this one may be the lightest and not that deep at all compared to its predecessors, it appears to be a very pleasant refreshment after two very heavy infusions. This one is sharper, lighter and somehow fresher, with shorter aftertaste and tones of nuts, spices and fruit.

Uji has been my favorite tea-producing area for years and this tea once again proved to remind me why I am so fond of it. A traditional, ripened Gyokuro of this kind is a tea worth special opportunities – at least in my eyes.