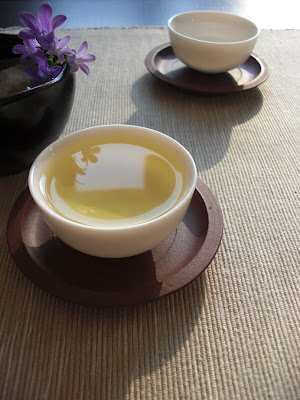 As the temperature outside keeps getting more and more enjoyable, air fills with smell of blossoming flowers and ever-present singing birds, we naturally start to crave for something greener, lighter and cooler, something to harmonize the body with tempo of changing weather. Luckily enough, some early-spring first picks of fresh teas are already available – naturally the most suitable and enjoyable option to satisfy the craving. 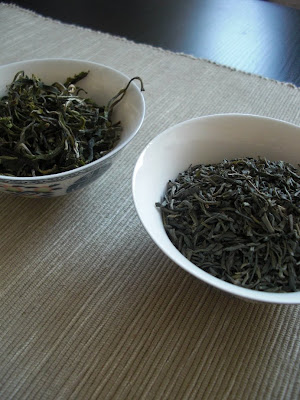 I've been able to try two 2011 teas so far – Yunnan Mao Feng from Teatrade.sk's offering and Hai Nan Bai Sha Lu from Nomad.sk. Both of these teas were picked in February and both are Chinese, though they originate in different provinces and vary quite a lot in processing. 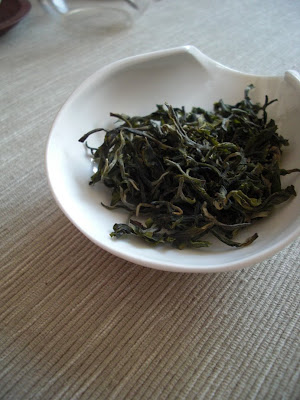 At the series of tea tastings organized by Teatrade last summer, I've got accustomed to preparing fresh Chinese green teas in tall glass cup instead of a gaiwan (though I casually still use it for these teas as well, it just depends on the mood). Their Mao Feng is therefore prepared in this style; its big, curly greenish leaves with quite a lot of young buds are poured into the preheated double-wall glass thermos, immediately intensifying the fresh, flowery and herbaceous smell, so typical for early pan-roasted Yunnan greens. 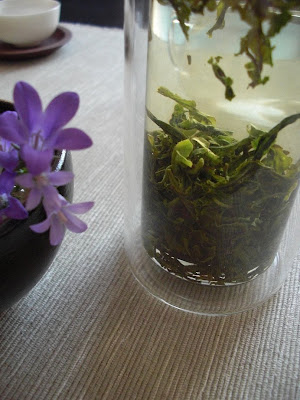 I use longer brewing times and quite hot water for this Mao Feng; even so, it remains very light, mild and clear, just as the early spring itself. The color of its brew is very transparent greenish-yellow, corresponding with the taste, which is light, smooth, nutty and flowery, cooling in mouth and has slightly buttery aftertaste. 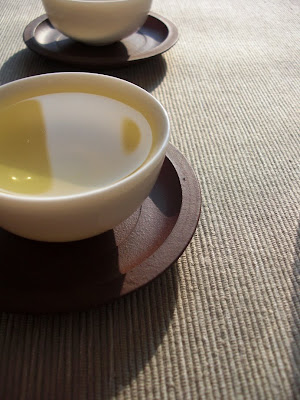 Its freshness is nicely represented by vivid herbaceous note, especially reminding me of green nettle and brew made of its fresh young buds (often consumed in Slovak countryside, especially as a traditional medicament – I don't know about other countries, though). 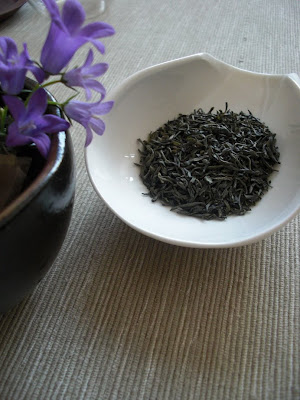 The second tea is Bai Sha Lu from Wu Zhi Mountain of Hainan, the smallest and southernmost province of China. It's leaves show some characteristics of the way it was processed – in contrast to Mao Feng, these leaves were steamed and chopped, resulting in quite short, uniform appearance and mat, light green color. Their smell is thicker, deeper and fruitier with slight reminiscence of Japanese green teas (which are, after all, processed in a very similar way). 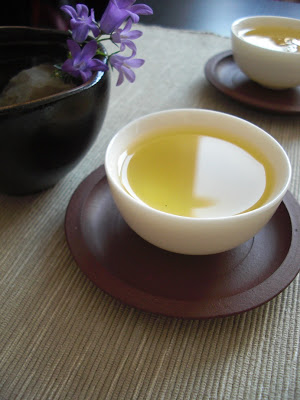 Though this tea is much heavier and less flowery-light than the pan-roasted Yunnan Mao Feng, it also posses the typical spring character, which, however, shows up in a completely different - and likewise interesting - way. 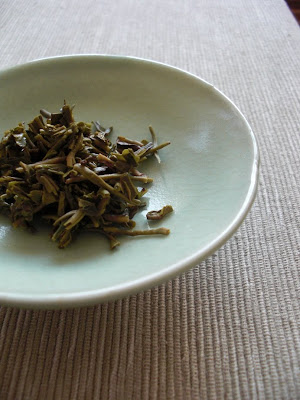 Only few things can bring such peace to mind as drinking fresh tea in the afternoon sun. Judging from these two early birds, it seems like there is definitely a lot to look forward to about this year's harvest in China. 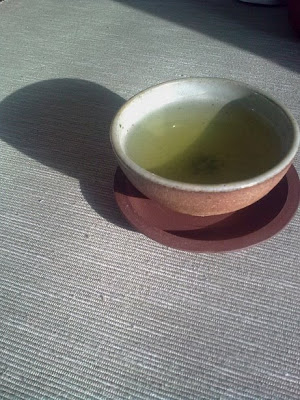 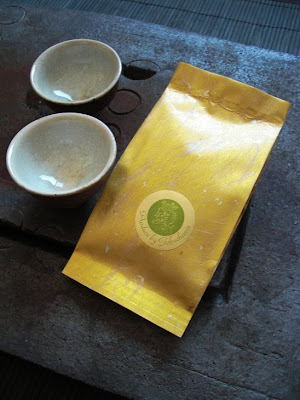 This tea interested me from the first moment when I saw it in Teamountain's offering – another of Gokuchanin's oolongs, once again inspired by famous non-Japanese tea. While the main inspiration of previously mentioned Hanhakoucha Tefutefu was Taiwanese Oriental Beauty, in case of Choucho, it's a whole category if teas - Yancha from Wu Yi. This tea is made of Sayamakaori cultivar, which is quite typical for its native Saitama prefecture. When I saw it in offering of Slovak shop Nomad some time later, I had no doubts and purchased it immediately. 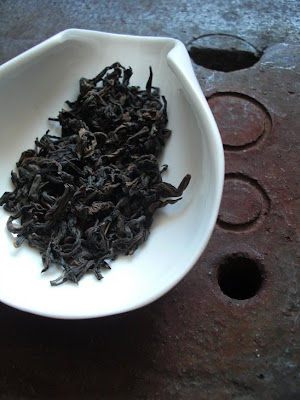 The dry leaves really are reminiscent of Wu Yi oolongs – they are mostly brown, quite dark and curly, though generally a bit shorter than regular rock teas. However, the first big difference can be observed in their smell – very fruity, fresh, light and somehow typically for Gokuchanin's Hanhakoucha in general. They share some notes with Tefutefu as well and, more surprisingly, also with Korean Yellow tea – very interesting indeed. There are no vivid roasty or nutty chocolate tones typical for Yancha. 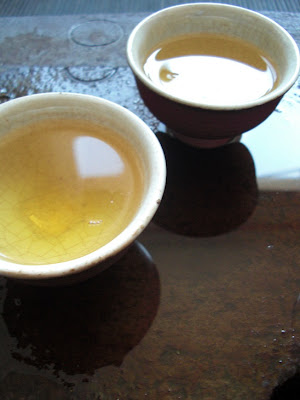 The first infusion is golden yellow in color, very clear, refined and fruity in taste with dominant tones of sweet, ripe apples and apple juice, plums and a slight umami undertone. The taste is very complex, harmonic and mouthfilling, yet light and refreshing with long, spicy aftertaste lingering on tongue with mild, yet vivid ripe fruity tones.

The second infusion, though brewed for a shorter amount of time, has darker, pure orange color (very whiskey like). It's also a bit more intensive in taste, even more fruity than the first infusion, less refreshing and more warming; still, the tea keeps its noble complexity with dominant fruitiness and, in this infusion, also a hint of pleasant creaminess and citrus fruit. The aftertaste gets even longer after this infusion, being very apple-like and gradually becoming sweeter and sweeter. 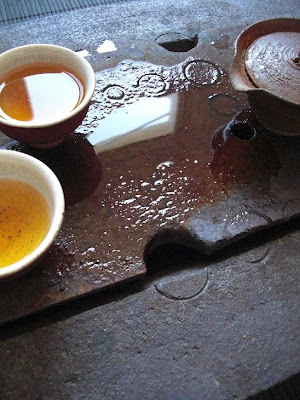 The third infusion gets even more orange, though still preserving the clear transparency in color; the taste is very similar to that of the previous brew, just a bit more spicy, intensive and mouthfilling. The creaminess is significantly stronger in this infusion, contributing to the noble smoothness and repressing any possible astringency.

In terms of color, the fourth and fifth infusions are very similar to the second one, while in taste, they are still just as intensive as the third brew – smooth, fruity and a bit citrus-like, still very sweet, warm and creamy with long, spicy aftertaste. This character continues through the sixth and seventh infusion, before the tea starts losing its complexity. 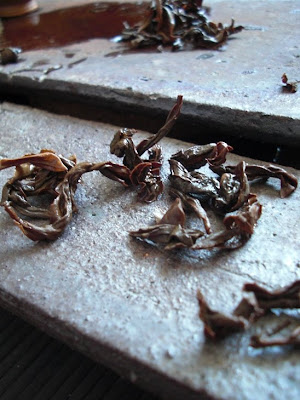 In my eyes, Hanhakoucha Choucho proves that Gokuchanin is not trying to copy the famous original teas and instead just takes some inspiration from them to certain extent, which varies from tea to tea. After all, this tea reminded me of much more than just Wu Yi rock teas – Korean yellow tea, Bai Hao and even Japanese black tea, Koucha. Moreover, it still keeps the typical Japanese character under all these “exotic” tones. Personally, I hope that Yoshiaki Hiruma will never get bored nor run out of inspiration and will keep experimenting like this – I'm already a big fan of his work, which seems to be one of the most extraordinary amongst Japanese producers.

Posted by Michal Tallo at 1:47 PM No comments: