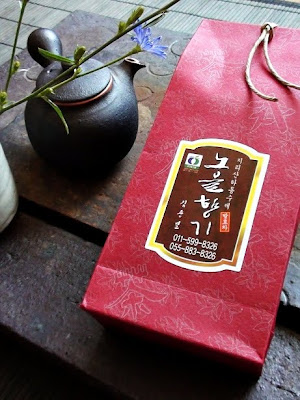 Today's weather isn't exactly green. The sky is cloudy, air quite breezy and it occasionally rains – somehow, it feels like this is the day I've been awaiting to open this special tea.

This season, Teamountain offers two yellow teas made by tea master Kim Jong Yeol (and it seems like one made by Kim Shin Ho is on the way as well), named poetically “Sunrise” and “Sunset”. I purchased Sunset on my visit to Brno's Sklenena Louka teahouse, owner of which also told me her impressions of these teas – while Sunrise is more chocolate-like and dark, Sunset is supposed to be more spicy and somehow reminiscent of Taiwanese Bai Hao oolong. While I haven't bought both of these teas and, therefore, will not be able to compare them in a similar way, I'd very much looked forward to trying Sunset on its own.

The origin of this fermented tea is Yonggang-Ri, Hwagae-myeon, Gyeongnam, it was picked during the second week of May and is made of wild, approximately 20 years old tea bushes. 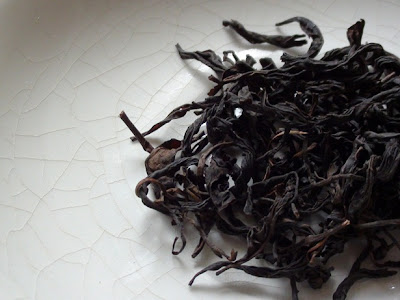 This simple, yet beautiful packaging is opened and immediately releases intensive, deep smell of meadow flowers, honey and cinnamon. In terms of appearance, Wuyi Yancha is the first thing that comes to my mind; these leaves are dark with shades of black and brown, curly and mostly unbroken. When placed into the preheated teapot, their aroma intensifies even more, now being even sweeter and revealing a slightly roasty, bread-like note. 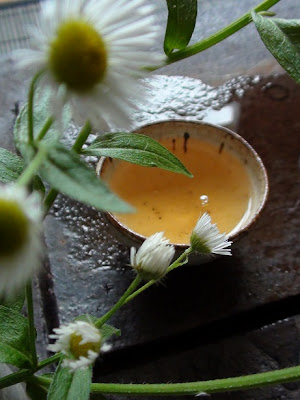 The first infusion is brewed with freshly boiled water and is orange-golden in color, still retaining the deep smell of dry leaves. Its taste is equally deep and sweet, offering countless tones, both those already revealed in smell as well as many new – dried fruit, particularly apricots, honey, flowers, cinnamon-like spiciness and very subtle, refined roast. Immediately after the first sip, this tea feels strong – not in a way of being over-brewed or too harsh (the exact opposite is true – this tea is very mild and noble), but it seems to have strong, warming and yet calming energy, which is impossible not to notice. This infusion also has expectably long and vivid aftertaste, filling the throat with subtle deep sweetness.

The second infusion is slightly darker orange in color, very transparent and very aromatic. Honey, fruit, meadow flowers and cinnamon remain the main tones, though they now seem to have a bit different mouthfeel – even deeper and smoother. There isn't a single trace of bitterness in this brew, instead, it fills mouth with various tones of ripe and dried fruit, seemingly alternating and complementing each other. The aftertaste of this infusion is more pronounced and even warmer than that of the first brew, evolving over time and becoming sweeter and sweeter. 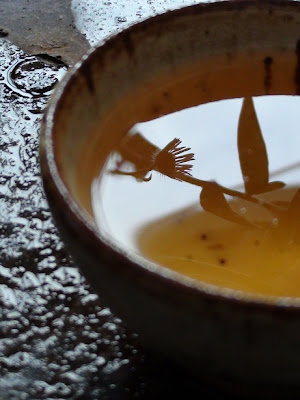 The third infusion returns to the lighter orange-golden color of the first one, though its taste remains similar to the second brew, being very fruity, sweet and slightly spicy, now revealing a new tone as well – citrus-like juiciness, which overtakes the aftertaste as well – a bit like warm orange or lime with honey.

This citrus-like note gradually becomes dominant in the fourth, fifth and sixth infusions, though most of the other fruity and sweet tones remain present as well – just not as dominant as before, now they seem to be hidden under the main citrusey nuances. All of these brews retain the significantly warm, calming energy, detectable primarily in the long aftertaste. 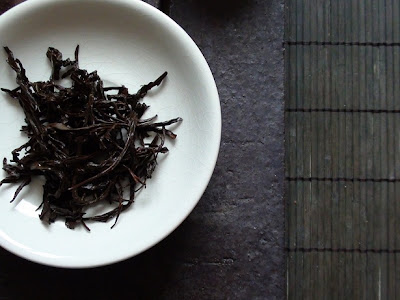 With its clear, deep character and warm, remarkably soothing energy, this Balhyocha makes a simple session feel like a very special, important occasion. Its lyrical name Sunset seems to be very well chosen – it really has power to create the atmosphere of a calm, silent evening on a meadow inside a wild forest, watching the sun going down slowly; all that in a single cup, even in the heart of a city.