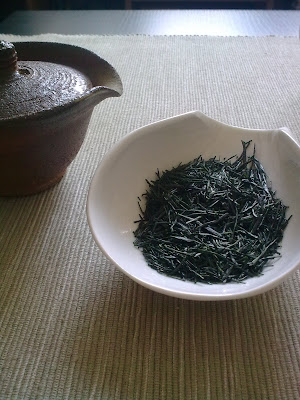 This time, I have chosen the highest grade of Sencha in collection of samples from Peter Stanik, as well as in Horaido's offering - Shuppincha HG.

This tea comes from high-mountain plantation in Uji, Kyoto and, as well as all other Horaido teas mentioned on this blog, was traditionally stored until Kuchikiri no Gi ceremony, held on the first Sunday of October. 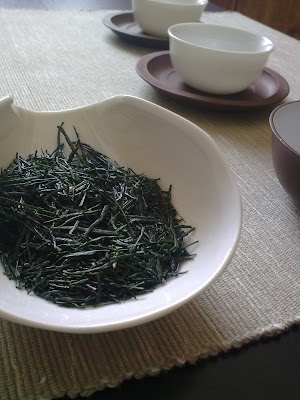 Expectably, these dry leaves are perfectly sorted, alike and in form of flat, shiny dark-green needles. They have noble, intensive scent of fruit, pines, almonds and hazelnuts, notes typical for Sencha of this high quality. It somehow even reminded me of another great tea from the same region – Marukyu Koyamaen Sencha Unjyo. Both of these teas share smell which is deep, complex and perfect in every way, while still maintaining beautiful, mild humbleness.

I decided to brew this tea in a bit colder water than I usually use for Sencha and extend brewing time instead to get out taste which is more intense and, for me, has much more to offer. 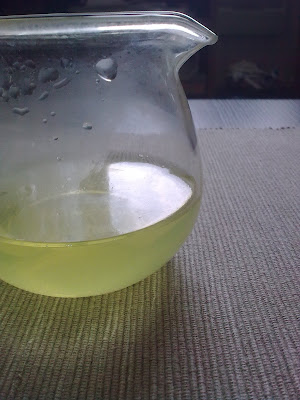 The first infusion is very light green in color and immediately hits the tongue with its sharp, yet completely harmonic taste with countless nuances and tones, most outstanding of which are pines, nuts, fruit and gentle touch of fresh mint, leaving aftertaste reminiscent of menthol. Overall, this taste is incredibly full and complex with deepness almost similar to that of Gyokuro or Kabusecha. Drinking this tea feels just like taking a walk alone in mountains full of conifers on cold and windy, yet sunny autumn day.

The second infusion is also light green in color and is, despite of much shorter brewing time, even sharper in taste, which is similar in character to the first infusion, dominated by deep, full nuttiness, peppermint coolness and long, intense aftertaste that lingers on tongue and doesn't seem to ever end.

The third infusion differs a bit from both previous in its color, which is now more yellowish-green, yet still very clear and beautiful. Its taste is fruity, full and still quite sharp, though the cool, mint tone as well as Gyokuro-like deepness seem to be absent. The aftertaste also seems shorter and less intense with new, flower-like undertone; however, the tea itself still isn't on wane, as this infusion tastes just like first infusion of some other type of high grade Sencha – in other words, it now tastes even more like Shizuoka tea than one from Uji. The sudden change makes this tea even more interesting; it's just like experiencing two different teas in one session.

As the third infusion caught my attention in such unexpected way, I decided to take this tea into two more brews – the fourth infusion is even more flowery, piquant and, in contrast to the first and second infusion, literally warm in character.

The fifth infusion doesn't show much difference from fourth, just being weaker overall, indicating end of this session. 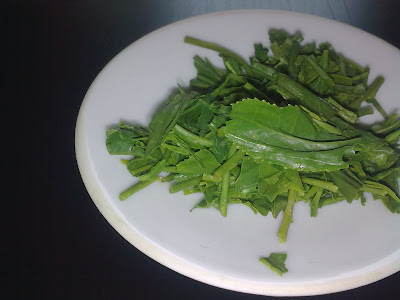 Shuppincha HG exceeded my high expectations, being absolutely well-balanced and beautiful in its complicity, offering hundreds of nuances in every sip, differing from one infusion to other; leaving my mind and body relaxed, calm and concentrated, just like the tea itself.