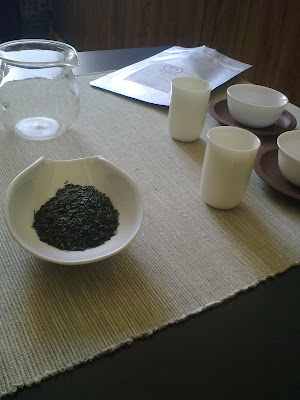 This is another traditionally stored Horaido tea from Peter Stanik of Pu-erh.sk. This time, I decided to take a closer look on one of those less commonly seen, side-products of standard Sencha and Gyokuro production – Jin.

Sencha Jin, as well as all other Horaido teas mentioned on my blog, comes from Uji and was traditionally stored until the beginning of October, when the Kuchikiri no Gi ceremony took place in Kyoto. 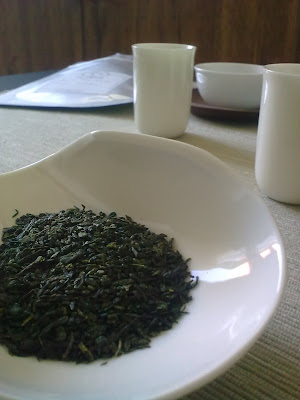 To Sencha (as well as Gyokuro, though this is not the case), Jin is what Tamacha is to Tamaryokucha - comprising mainly of the smallest, top leaves and tips, rolled and rounded during procession and therefore resembling grain in shape, while still maintaining the dark-green, plastic shine, typical for most Japanese green teas.

As for the smell, this tea has tones of flowers, pines and herbs, though this scent is somehow lighter and softer than smell of regular Sencha. 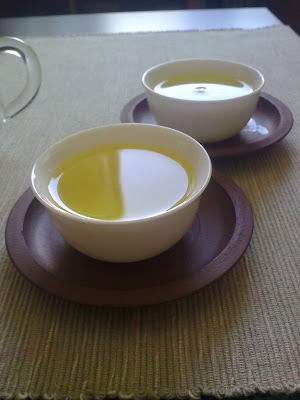 The first infusion demonstrates difference of this tea's character from more common Sencha and Gyokuro, not being that sweet, harmonic and deep and instead being generally lighter, more flowery and herbaceous in taste. Yet, this tea is surprisingly vivid, strong and intensive, creating aftertaste which is long, seaweed-like and literally fresh, just like modern Japanese Sencha after harvest - tone which I haven't found in any Horaido tea I've tried so far.

The second infusion is golden-yellow in color and maintains strong, vivid taste, which is now a little bit astringent, full yet still light, flowery and with aftertaste that remarkably lingers on the tongue for a long time.

The third infusion once again reminds me of seaweed, with moderate astringency and simple, somehow flat character, still being light and herbaceous.

One more infusion is made of this tea, though it isn't much different from the third one – herbaceous, astringent, flat and not at all deep, nutty nor sweet. Quite a simple tea. 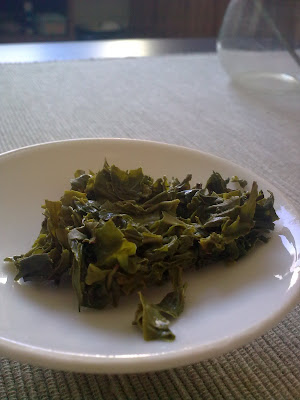 I have to say that this isn't really the type of tea I prefer to drink – that would probably be the deep, nutty character, which can be found in Gyokuro, Kabuse and high-grade Sencha. Instead, this is a simple, basic grade of Japanese green tea, which may be good as a daily, though I have bigger favorites even in this category.

I'm not saying it's bad; it just isn't that much of my type of tea.