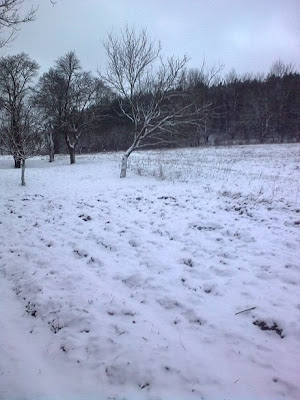 There is something about spending Christmas in the countryside; something one can hardly achieve in the city. This year, we decided to move for the holidays to our house located in a lovely little village to the north of Bratislava, near the town of Myjava. This house is located close to the forest in a quiet mountainous area (the upper picture is taken right in front of its door); together with a bit of snow, this resulted in really magical Christmas.

I've returned to Bratislava three days ago and decided to write one more post this year today. 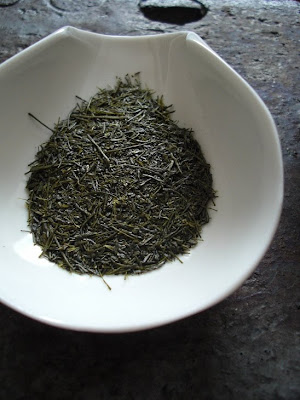 Just like the competition grade Gyokuro Saemidori I wrote about in previous post, a sample of this tea was kindly sent to me by Martin Spimr of Teamountain. Originating in Shizuoka and picked in May from Yabukita cultivar, it competed in National Tea Competition of Japan, where, with an amount of f 186 points out of 200, it received the third prize in Fukamushicha category.

The package is opened and reveals leaves, which are typically short as a result of deeper steaming; what is unusual on these, however, is their color – light green, almost yellow, yet still shiny and overally very attractive. Their smell is very humble, fresh, predominantly fruity and has tones of apricots, peaches and blackberries. 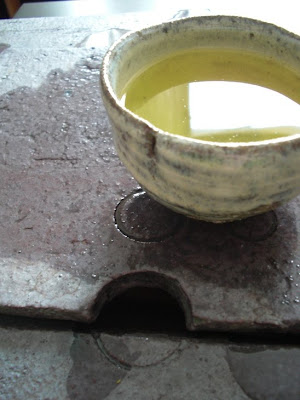 Because of the higher fragmentation of its leaves, this Sencha is prepared in a small kyusu with mesh filter instead of my favorite shiboriashi. The first infusion is very opaque and has color similar to that of dry leaf – yellowish green. Its taste is very fruity, complex, with vivid hint of umami and freshness, which somehow reminded me of Nunosawa Shincha I'd been enjoying at the beginning of this summer.

The second infusion is brewed only for a short while, resulting in even more opaque, almost non-transparent yellow color and very smooth, harmonic and complex taste with tones of young fruit, milk and umami. The overall feeling of this infusion is a bit warmer, less fresh and lacks the similarities to Shincha. The aftertaste is very humble and mild, quite sweet and once again predominantly fruity.

The third infusion is similar to the second in color and its vivid opaqueness. While still maintaining the fruity sweetness and umami of previous infusions, this brew is now a bit sharper, mouthfilling and somehow heavy.

One more infusion is made of these leaves, resulting in a bit woodsy, warm brew and fruity, full aftertaste, already a bit flat. 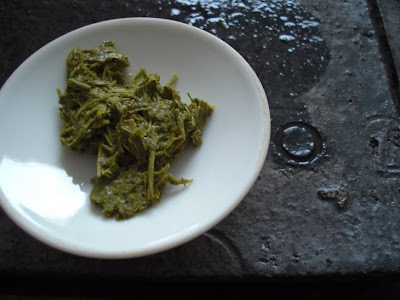 I have to admit that I'm not a big fan of Fukamushi teas – I tend to avoid them because of their almost aggressive sharpness and something I would call “fake deepness”. Purity and complexity of Asamushi somehow seems to fit me better. This tea, however, is an exception to some extent, being unusually humble and harmonic, even in further infusions.

May the new year be really successful and filled with good tea and happiness for all of you.