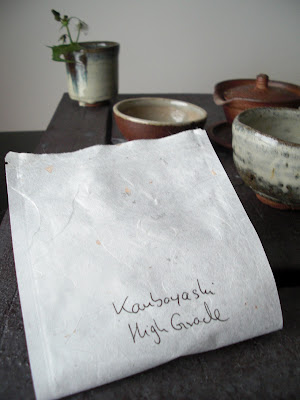 Snow! The weather suddenly changed few days ago and sunny, windy autumnal days were completely replaced by typical winter atmosphere with temperatures dropping under zero and whole country being covered in snow and mist – it's snowing heavily even now, as I'm writing this. Don't get me wrong, this definitely isn't complaining - after spring, winter would probably be the season I enjoy the most.

This tea is the second sample kindly sent by Calogero of Ochaya.de. Just like the first one, it was produced by Kanbayashi and originates in Uji, Kyoto.

Labeled “High Grade”, this Sencha is lower grade than Premium, being the less expensive one of two Kanbayashi teas in Ochaya offering. 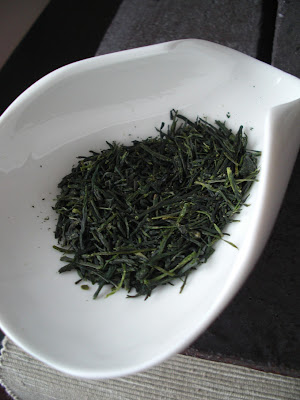 Its dry leaves are shorter than those of Premium grade, less uniform and lighter in color. Compared to the Premium grade, their smell is less sweet and nutty with more vegetal tones, though still is as deep as I would expect of good Ujicha. 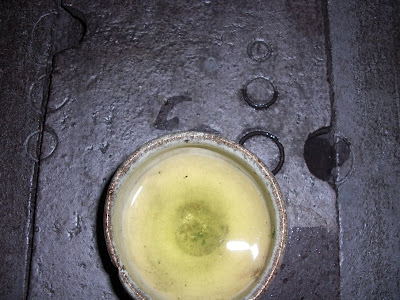 Brewing temperature is just a few degrees higher than that used for this tea's Premium counterpart, resulting in a light-yellow, clean first infusion, just as clear and light in color as in taste, which is buttery, deep, milky and fruity, leaving a cool, balanced aftertaste with tones of plums and vanilla. There also is a significant sweetness in this infusion, which wasn't that vivid in smell of dry leaves.

The second infusion, prepared with water of the same temperature as the first one and brewed for shorter time, has light-green color and is more opaque than the previous brew. Its taste is fuller, more intensive and with vivid note of ripened fruit, especially apples and pears. The aftertaste is milky and creamy, though surprisingly shorter than that of the first infusion. 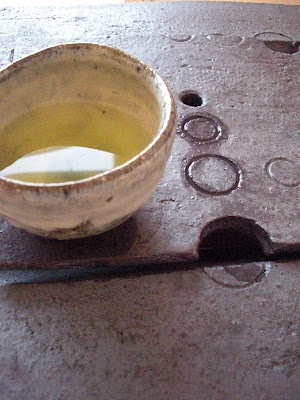 This tea is then brought to one more infusion – very mild, woodsy and dry; still enjoyable, though the flavor is already quite flat. 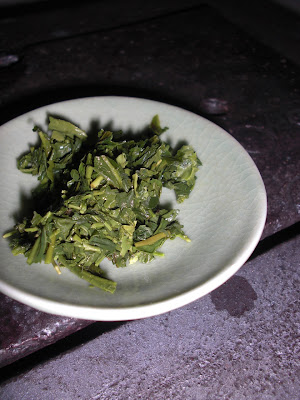 Though this tea offers smaller range of tones and is much more simple and mild than Kanbayashi Premium, these two still have something in common – both are deep, fruity and good representatives of Uji Sencha. In my eyes, Premium is more of a “special-occasion” kind of tea, while High Grade is an ideal daily-drinker Sencha; that kind of tea which is simple, yet still won't get boring after some time.

As a bonus - have a blurry picture of today's snow in Bratislava, taken from my apartment's window few minutes ago: 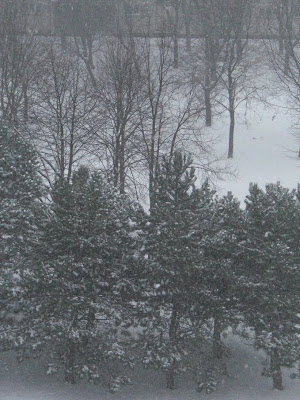