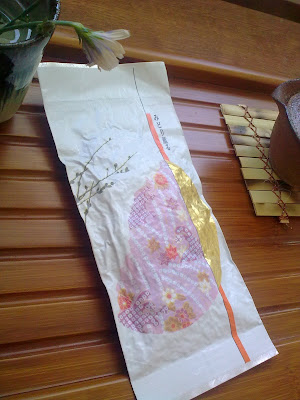 I made a little pause between my travels and came back home from for a few days – it isn’t a long way at all, just one and half of an hour by train from to . Meanwhile, the weather here has calmed down and finally stabilized on delightful 25 degrees Celsius. It seems like new spring is being born outside – after two weeks of terrible heats and one week of heavy downpours and thunderstorms, flowers are growing again in large quantities and are now in their blossom – very enjoyable to watch and feel.

This Kabusé is one of two fresh Ichibancha teas I bought in a teahouse in . It comes from offering of Martin Špimr’s Teamountain, which, from all my previous experiences, is a synonym of good tea. This tea is made of Okuyataka cultivar – quite uncommon and rare in some way. It was produced in a of , and possibly comes from farm of Mr. Katahira, who already is a well-known producer for me and probably also for readers of this blog, though I’m not 100% sure about this, as Teamountain gives no information on producer on their website in this case. 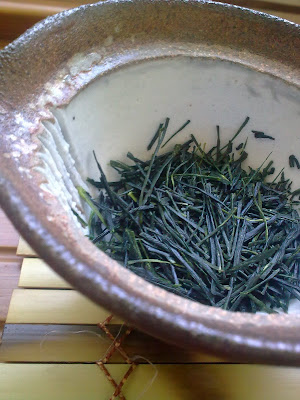 Long, shiny, dark-green and narrow needles in perfect condition – that’s what you find after opening the package. They are really quite dark in color, resembling Gyokuro more than Sencha. This tea is prepared in my new Shiboridashi made by Petr Novák, as it fits it perfectly – and, moreover, thanks to high quality of processing and care these leaves received from producer, they won’t require the thick strainer of my good old Kyusu.

These dry leaves have very soft, sweet and noble smell, which is at least as wonderful as their look.

After being brewed in almost lukewarm water, they produce an infusion which is light-green in color and very deep, sweet and pleasant in taste. The umami is very vivid, once again greatly resembling high-grade Gyokuro. There is one exception, however – this fresh, light and fruity tone, so typical for good Sencha. 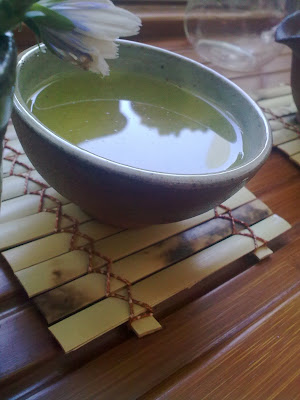 Second infusion is being prepared with just a bit warmer water and shorter brewing time. The tea now is brighter green in color, while its taste and smell are now more Sencha-like. There still is a distinct umami tone, though. Yet, this infusion is very fruity, complex and strong, full and deep on tongue and is followed by strong aftertaste with tones of ripe apples and plums.

Third infusion is also very fruity and already leaves most of the vivid Gyokuro characteristics behind. It still is very complex in mouth, with aftertaste even stronger than before. There still is no unwanted astringency or bitterness in this infusion.

Fourth infusion is already lighter in color and whole character, though still being very pleasant and maintaining many positive qualities of previous brews. Fifth infusion is made after this one, being similar to fourth, just with less fruity, noble and deep tones and more of woodiness and a bit of grassy feeling. 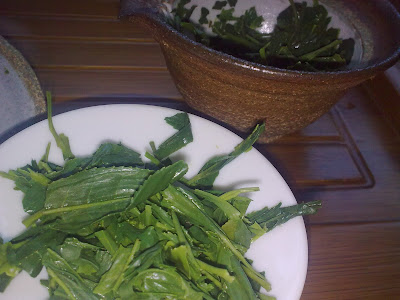 After this last brew, leaves are still lively-green and full of life; big part of them is therefore eaten with same pleasure as I drank the tea made out of them. These leaves are very sweet and tasty, still demonstrating high-quality of this tea. 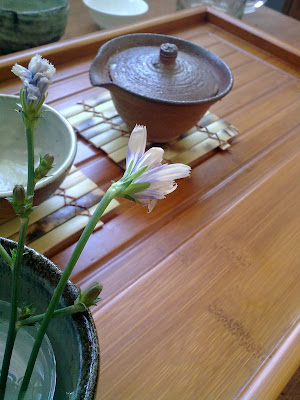 Also a small note on the teaware I used - this little, cca. 80ml Shiboridashi with cup is the first work by Petr Novák in my collection. Until now, I never used his teaware, apart from few teacups in various teahouses in Czech republic - I always have been just admiring his works on internet, mostly on Darjeeling.cz.
After using this set for three times, I can already say that it immediately became my favorite tea-brewing device. It not only is pleasant to watch and touch, it also fits in hand perfectly and is very functional, with great pouring action. I also appraise that thanks to its elevated edge, it doesn't burn fingers at all and, therefore, is very easy to manipulate without unnecessary effusion.
Great work, Petr, keep it up.
Posted by Michal Tallo at 6:54 PM